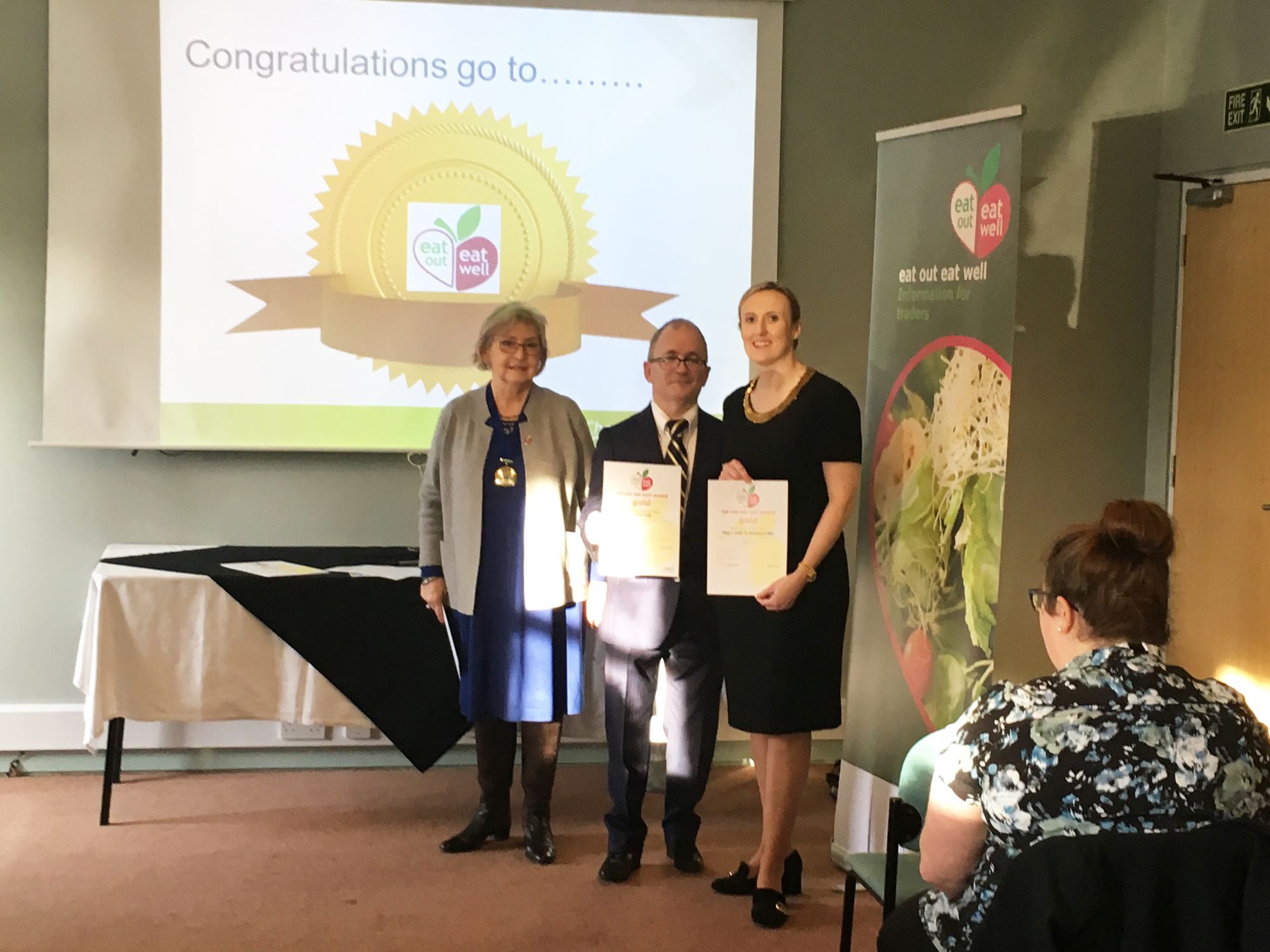 Banbury, Oxfordshire – February 2, 2018 – Reg and Alison Howe of Banbury-based catering and dining chain Reg’s Café collected two more Eat Out Eat Well Gold Awards – one each for the couple’s Banbury and Bloxham Mill cafés – at an awards evening held earlier this week. These new accolades, presented by Cherwell District Council, mean all three of the chain’s premises have now attained the coveted Gold Award in recognition of their success in promoting healthy eating options. (Reg’s Café in King’s Sutton was awarded the Eat Out Eat Well Gold Award by South Northamptonshire Council for the second year running at last November’s Northamptonshire Food and Drink Awards.) The Howes believe their chain’s “Triple Gold” Eat Out Eat Well status is unique in their region if not the whole of the United Kingdom.

“I know it’s a bit of a cliché, but we really are passionate about promoting healthy food options at Reg’s Café,” says co-owner Alison Howe. “We’ve worked very closely with the environmental health team at South Northamptonshire Council for the past two years and with their counterparts at Cherwell District Council more recently. We’re very grateful for the help and advice we’re received from both teams, who’ve gone out of their way to ensure we get healthy eating offerings at our three cafés absolutely right. Our great staff have also made an invaluable contribution, of course. These awards represent very welcome recognition for the efforts of everyone involved and demonstrate just how much can be achieved when public services and private enterprises like ours work in partnership for the benefit of the region’s consumers.”

About the Eat Out Eat Well Award
Eating out can have a significant impact on our diet. The Eat Out Eat Well awards scheme recognises caterers who provide and promote healthy eating options, making it easier for their customers to make healthy eating choices. Caterers can be presented with a bronze, silver or gold award based on the food on offer, their cooking methods and how they market and promote healthy options to their customers. The award also recognises the nutritional training and knowledge of their staff. An additional award is available for caterers who follow strict government standards for buying food that meets low salt and low fat standards.

About Reg’s Café
Founded by husband and wife team Reg and Alison Howe, Reg’s Café is a catering and dining business based in Banbury, Oxfordshire. Convinced that there remained a huge appetite for freshly prepared, British “plain cooking” amid an ocean of burger and pizza chains, the pair opened their first café on a Banbury industrial estate in January 2013 and haven’t looked back since. The company now has three cafés serving the local area and has successfully diversified into catering services and sandwich deliveries. Reg’s Café has won a large number of prestigious awards by sticking to its founders’ ethos of providing traditional British hot food menu items, using high quality, locally-sourced produce prepared on the day, on the premises in top-rated hygienic conditions. (Each of the company’s three cafés has received 5-star status for its hygiene practices.

Accolades won by Reg’s Café include: Best Restaurant in Oxfordshire (twice); Best Café/Deli/Express in Oxfordshire (twice); Best Café/Bistro in the South of England (three times); Trip Advisor Certificate of Excellence for the past three years; the Eat Out Eat Well Gold Award for all three of the chain’s premises; and the coveted Good Food Awards Blue Ribbon (twice).