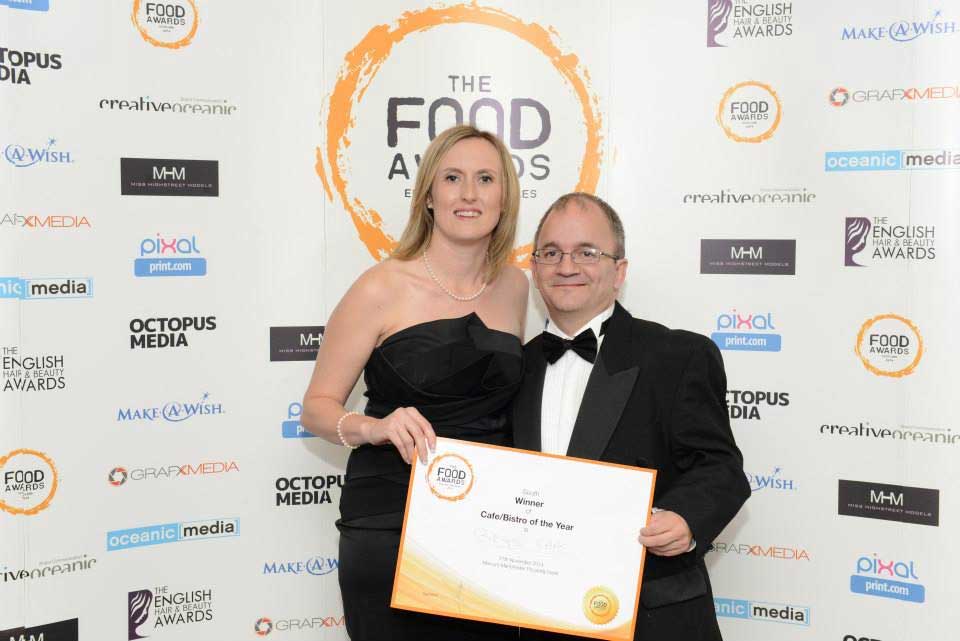 Banbury, Oxfordshire – November 10, 2017 – In the past month, Banbury-based catering and dining chain Reg’s Café has won the coveted Good Food Awards Blue Ribbon and Food Awards England’s Best Cafe/Bistro in the South East, the latter for the third time since the company’s foundation in January 2013. Now Reg’s Café is looking to meet demand from shoppers and offices workers as well as its core industrial estate-based customers by opening new cafés in other town centres in the region. The company also has plans for further expansion of its catering and sandwich delivery services throughout the south Midlands.

“It’s been just five short years since my wife Alison and I moved our established car and van hire operations into larger premises on the Thorpe Road industrial estate and sat there wondering what to do with this very big room that came with the new building,” says Reg’s Café co-founder Reg Howe.

“It suddenly occurred to me that there was only a single burger van providing food for the whole estate and I turned to Alison and said: ‘let’s open a café!’. She thought it was a mad idea given that neither of us had a clue about operating a catering business at the time. What we did know, though, was this: we both loved traditional, homemade British cooking and we thought there was a gaping hole in the market in the Banbury area for our sort of food. So we just went ahead with opening our first café a couple of months later. It’s been a bit of a white-knuckle ride since then.”

The Howes set about learning the business, recruiting staff, finding local suppliers and exploiting Alison’s marketing acumen to promote the Reg’s Café brand. Such was the success of their vision that within ten months of opening that first café, the couple had already won one of the region’s most prestigious industry accolades: Best Restaurant in Oxfordshire by Public Vote from the Oxfordshire Restaurant Awards.

Having developed a great local reputation for serving good, old-fashioned hot and cold food, freshly prepared and made on the premises from locally sourced produce, not to mention winning a hatful of industry awards, Reg and Alison firmly believe the time is now right to take their business proposition to a wider market. They’re already looking at suitable premises in Banbury town centre and are considering a move into other towns in the south east too.

“We pride ourselves on our delivery of excellent service and a tasty British menu to over 3,000 customers every week in the Oxfordshire, Northamptonshire, Buckinghamshire and Warwickshire region,” says Reg, “and we see no reason why people in other areas wouldn’t appreciate those things too. Wherever we operate, we play an active role in the community as well, sponsoring local sports teams and individuals, and supporting local events and charities. People like that.”

Founded by husband and wife team Reg and Alison Howe, Reg’s Café is a catering and dining business based in Banbury, Oxfordshire. Convinced that there remained a huge appetite for freshly prepared, British “plain cooking” amid an ocean of burger and pizza chains, the pair opened their first café on a Banbury industrial estate in January 2013 and haven’t looked back since. The company now has three cafés serving the local area and has successfully diversified into catering services and sandwich deliveries. Reg’s Café has won a large number of prestigious awards by sticking to its founders’ ethos of providing traditional British hot food menu items, using high quality, locally-sourced produce prepared on the day, on the premises in top-rated hygienic conditions. (Each of the company’s three cafés has received 5-star status for its hygiene practices.