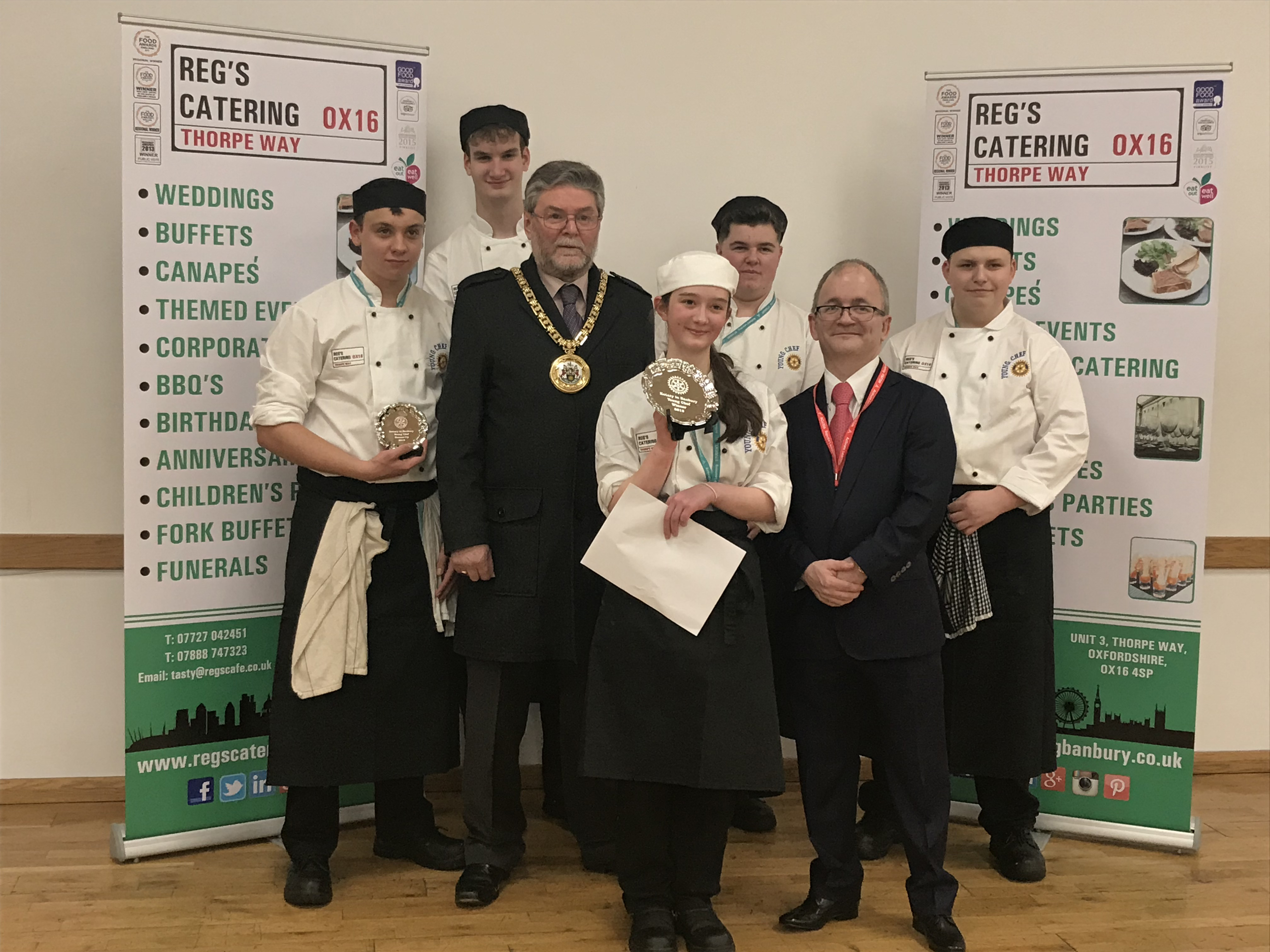 Banbury, Oxfordshire – January 24, 2018 – A main course of roasted cod with vegetables, followed by chocolate and hazelnut mousse, enabled Hook Norton resident Sophie Brown to take the honours at last night’s final of the Rotary Clubs of Banbury Young Chef Competition sponsored by Reg’s Catering. Seventeen-year-old Sophie, a student at Banbury & Bicester College where the final took place, triumphed over four other finalists to receive the winner’s trophy from Banbury Town Mayor, Cllr Colin Clarke. Runner-up was Liam Wood of Brackley, who is a fellow student of Sophie’s at the college and impressed the judges with his mushroom and chicken risotto with bacon followed by raspberry and white chocolate cheesecake. Both now have the opportunity to take part in the district final, with the possibility of reaching April’s national final of the competition.

“We were delighted to be involved in this fantastic competition. The judges had an extremely difficult choice though in the end, I’d say they made the right decision. But the food prepared by every single one of these talented youngsters was absolutely amazing. The standard of the food they were able to deliver in such a short time certainly gives me hope that some of them will consider a career in our industry. And if I were in their parents’ shoes, I’d be sitting back and letting the kids dish up the family meals in future.”

About Reg’s Catering
Reg’s Catering serves freshly prepared food to attendees at outside events, business meetings and social occasions throughout the south of England. The company forms part of the Reg’s Café catering and dining business founded by husband and wife team Reg and Alison Howe, based in Banbury, Oxfordshire.

Convinced that there remained a huge appetite for freshly prepared, British “plain cooking” amid an ocean of burger and pizza chains, Reg and Alison opened their first café on a Banbury industrial estate in January 2013 and haven’t looked back since. The company now has three cafés serving the local area and has successfully diversified into catering services and sandwich deliveries. Reg’s Café has won a large number of prestigious awards by sticking to its founders’ ethos of providing traditional British hot food menu items, using high quality, locally-sourced produce prepared on the day, on the premises in top-rated hygienic conditions. (Each of the company’s three cafés has received 5-star status for its hygiene practices.